Seismic wave velocity profiling is carried out in the prospecting geophysics mainly. Profiling is carried out by classical refraction to determine the thickness of low velocity zone (LVZ) and depth to bedrock. The other way is “uphole” profiling to determine the seismic P-wave velocities along wet borehole up to tens meters. This profiling bases on repeated excitation of elastic waves using sledgehammer or weight-drop at the surface near borehole, when changing the position of the receiver (active 1-channel hydrophone or 24-channel hydrophone array. 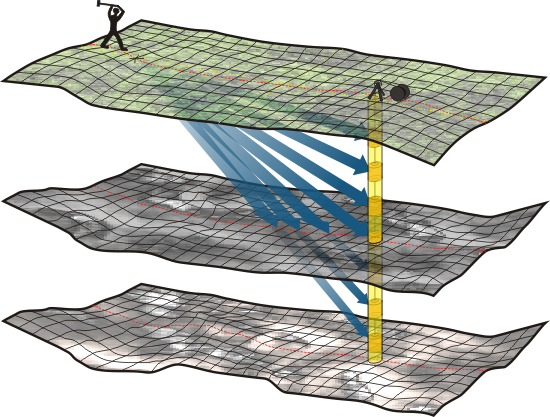 An example of two superposed seismic uphole records with opposite polarity, together with the determined types of the waves 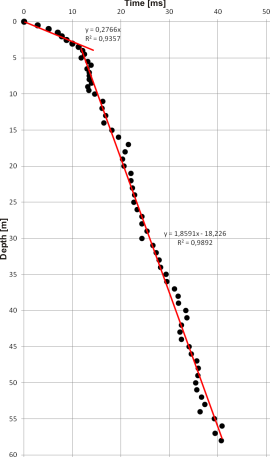 An alternative wave source is co-called “borehole sparker” which is moving in water-filled borehole at a fixed position of receivers at the surface.
Another type of borehole testing is “downhole”. During this type of testing instead hydrophone, the multicomponent geophone probe is coupled to the PVC or ABS cased and grouted borehole wall, by a pneumatic clamping system. This probe can be used in water-filled or dry boreholes as well. As a source for P-waves the hitting using heavy sledgehammer on the surface is used or shooting in two sides of horizontal shear beam in order to get reverse polarized S-waves.
Analysis of downhole testing allows to determine the changes of P- and S-wave velocities, finally G, K, E dynamic elastic modules and Poisson’s ratio can be calculated, later applied at designing phase. Results of velocity profiling are presented as hodographs – changes in waves arrival times with calculated velocities and thicknesses of layers (left).

Seismic crosshole testing requires preparing at least two specially boreholes spaced a few meters. One borehole is used with borehole seismic P- & S-waves sources. Second one will be used with multicomponent geophone probe as receiver(the same like in “downhole”). Most commonly the mechanical seismic waves sources are used. In case of S-wave is highly recommended to apply source with horizontal orientation feature, for reversible polarization of generated S-waves, for better first arrivals determination. During each measurement source and receiver are positioned at the same depth in two boreholes. It allows to determine the velocity profile in precise way. 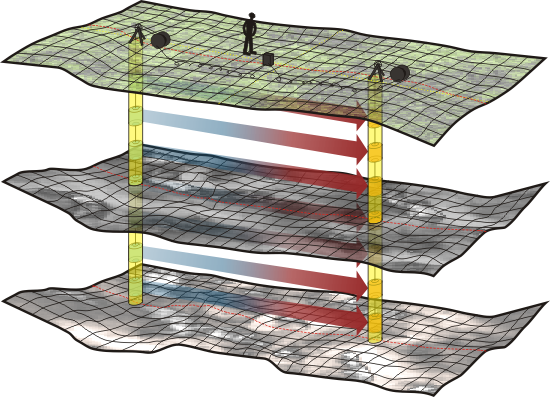 Since the measurement is performed between boreholes, it is necessary to accurately determine the distance between them. It is necessary for the accurate calculation of the wave velocity at every measured level. For precise determination of boreholes deviation, special sealed & temperature compensated probe is used. It includes 3-axis megnetometer (for horizontal direction) and dual tilt sensor (for inclination). On the right there is a sample of crosshole testing between 2 boreholes. These studies were carried out for designing of skyscraper. The aim of testing was determination of seismic waves velocities and finally – G, K, E dynamic elastic modules and dynamic Poisson;s ratio (similarly like in downhole testing). Application of mechanical S-wave source with the reversible polarization feature at each depth measuring level was very helpful in precise S-wave “picking”. It is seen that the times of S-wave arrival significantly vary with depth. Longer arrival times inform about decreased velocities, which in turn allows you to locate zones or layers with reduced “strength” parameters.