Multichannel Analysis of Surface Waves technique- in active MASW 1D/2D/3D and passive MAM/ReMi 1D versions, bases on seismic S-waves analysis included in dispersive Rayleigh waves. A characteristic feature of the Rayleigh wave is that it represents about 70% of the total elastic energy waves recorded during the measurement. S-wave, whose velocity and attenuation are directly dependent on the elastic properties and density of the soil is ~ 90% of the Rayleigh wave. The difference between the technique MASW and MAM/Remi relies on different types of elastic energy sources. For MASW such sources are: sledgehammer, weight-drop, while for the passive measurements MAM/REMI random vibrations from traffic, building works, etc. in the vicinity of the acquisition area are applied. Often they are generated artificially by tractors, trucks, diggers, bulldozers.

MASW 1D/2D/3D MAM/Remi 1D are a response to the requirements of designers and constructors to determine in a quasi-continuous changes of dynamic modules: shear G, bulk K, Young E, Poisson’s ratio. These parameters are useful to predict engineering objects subsidence. These surveys are an alternative to static SCPT. This is due to the fact that the probe SCPT allows to specify the initial G modulus him only in the probing place. Limitation of SCPT is: low energy, underdeveloped, nonrepeatable P and S waves surface sources, resulting in disruption and reliability. 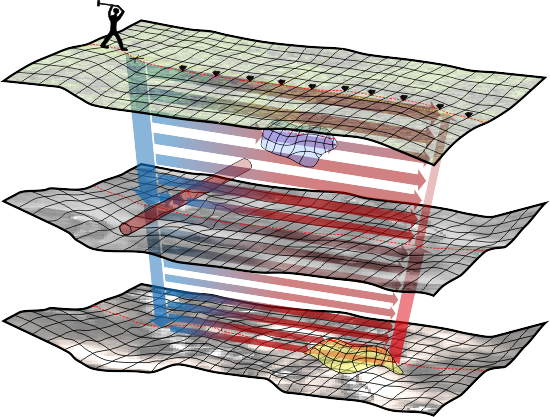 In contrast to the SCPT, MASW 1D/2D/3D and MAM / Remi 1D allow for continuous, non-invasive, more time&cost effective determining of S-wave velocity distribution with depth. During a 115 m MASW profile we can simultaneously identify ~20 S-wave velocity 1D profiles with depth. Knowing density, Gmax, E and Poisson’s ratio can be deteremined to depth of about 40-45 m, depending on geological conditions.

In the case of MAM/Remi 1D for the above conditions we have one S-wave velocity profile but to a greater depth ~55-65 m. 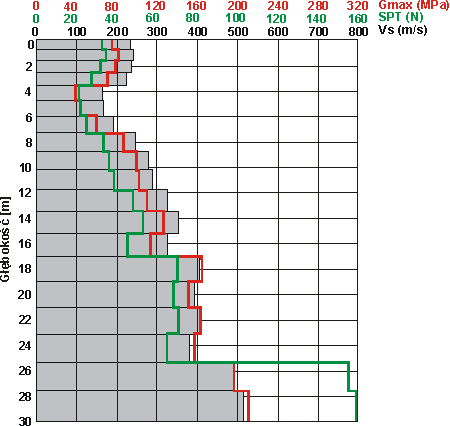 MASW studies rely on the analysis of S-wave velocity with depth which is only a part of the seismic records during seismic surveys. There is a direct relation between S-wave velocity and density & elastic properties.

During data processing records from all receivers are analyzed for frequency and phase shift wave on each trace. This allows determine the length of wave λ. Knowing the length λ and the frequency f the velocity of the wave is calculated. Changing the velocity depending on its frequency f allow to specify the dispersion curve. Dispersion curve is determined in the useful range of the signal (high S/N ratio).

In 2D measurements case at the same time a lot of dispersion curves for a number of shotpoints are determined to specify S-wave variation along the seismic line. Thus obtained dispersion curves are used to create 2D depth models.

These results can be correlated with geophysical or geotechnical studies.

Measurements and processing MASW/MAM is modern techniques and require a lot of experience in such studies. Our staff carried out the first surveys in Poland MASW commonly used i.e in the United States. Our company offers unique 3D spatial active MASW and passive MAM/Remi surveys, in correlation with other geophysical methods. 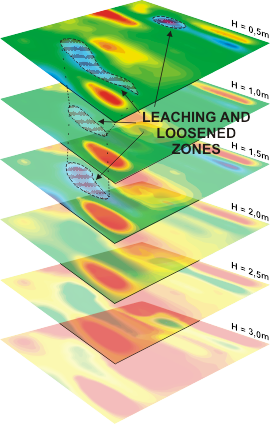