Geophysics provides non-invasive (non-destructing) exploration of the ground, it’s geomechanical parameters and structure, in the fast & cost-effective way. These methods are widely applied for solving the engineering and research tasks for many years. The proper choice of the geophysical methods helps to optimize work range of invasive geotechnical surveys.

GPR surveys are carried out as reflection profiling with variable resolution and depth range i.e.: for railway revitalization, modernization or study, the flood embankments, recognition of railway track bedrock and its subsoil, recognition of the ground for the proposed and existing transport infrastructure such as roads, highways, ring roads, the analysis of the position of the water table, shallow lithological and stratigraphic analysis. We also provide an innovative GPR method for spatial 3D surface scanning technique, for the purpose of mapping underground facilities such as infrastructure and foundations and their inventory. 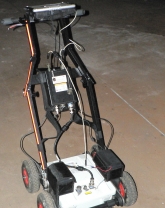 The most common geoelectric survey techniques are: Electrical Resistivity Tomography (ERT 2D – resistivity imaging), Vertical Electrical Sounding (VES 1D) and electro profiling (EP 1D). Resistivity Method using the above techniques is commonly used to determine the soil-water conditions, recognition of the geological structure in order to locate the areas of occurrence of groundwater, fault location, contouring the mineral deposits of rock and minerals. 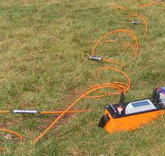 Gravimetric surveys are based on the variation of the gravitational field of the Earth, depending on its structure. The differences between bulk density of rocks cause changes in the distribution of gravity. This distribution depends also on the size, shape and depth of the occurrence of the heterogeneity (disrupting body). The most commonly used to assess the threat surface deformations in mining areas and for the detection of “migrating” natural and anthropogenic voids, mineral exploration, the location of faults, basements, tunnels and passages, crypts and tombs. 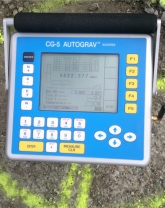 EM measurements of electromagnetic induction method in the form of dipole induction profiling rely on the study of conductivity (resistivity) of electrical subsurface layers. It is used for contouring of areas with contamination of ground water, for ground water exploration, the location of: leaks dikes, dams and canals, corrosion of pipelines, Unexploded Ordnance detection. 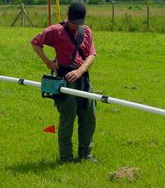 GeoSpectrum company performs all sorts of expertise, evaluation and research for design purposes, as-built, as well as geophysical monitoring.

Examples of the application of engineering geophysics…

Geological and geotechnical studies allow accurate determination of the parameters of the ground at a particular point. The most commonly used methods of geotechnical surveys are:

In addition, we offer specialized testing: